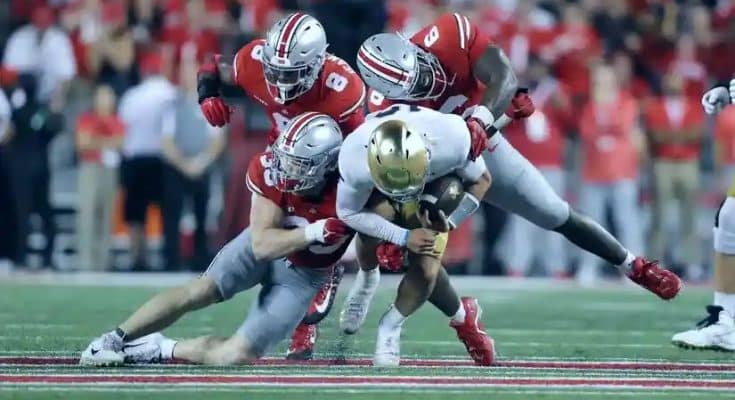 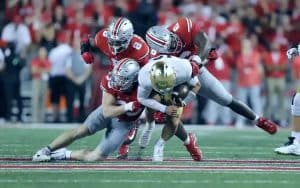 That vaunted Ohio State offense was supposed to make a statement against Notre Dame in the marquee Week 1 game on the college football schedule.

But after an apparent injury to wide receiver Jaxon Smith-Njigba and some real struggles on the offensive side of the ball, the Buckeyes had to grind out the win with a come from behind effort in the first half.

Here’s what you need to know about the game in Columbus.

Coming into the game, Ohio State was the No. 2 team in the AP top 25 college football rankings and Notre Dame the No. 5 team in the poll.

Expect the Buckeyes to stay locked in at second overall this week as top-ranked Alabama rolled over Utah State, but the Irish will fall in the updated rankings.

In the first quarter, C.J. Stroud connected with Emeka Egbuka for the first touchdown of the Buckeyes’ season and the 7-3 lead.

Luck of the Irish

Notre Dame opened up the 10-7 advantage early in the second quarter when back Audric Estime dove over the pile to cap off an 87 yard drive.

But it was Matt Solerno’s crazy catch that kept the Irish drive alive.

It was the Irish offense, not the Buckeyes, that got the better reviews in the first half of the game, especially the play of quarterback Tyler Buchner.

And that of Notre Dame’s defense, which rallied to the challenge of stopping the reigning No. 1 offense in college football on the road.

Throwing lanes were hard to come by for Stroud, who faced an inspired Irish pass rush, and whose receivers had difficultly creating space consistently.

And then it came right back

With the seconds ticking in the 3rd quarter, Ohio State needed a statement play, and got it when Stroud connected with Xavier Johnson on the go-ahead touchdown play to regain the lead.

And finished the job

Another major statement for the Buckeyes offense, driving a hard-earned 95 yards over 14 plays in 7 minutes 6 seconds to take the 21-10 lead over Notre Dame on Miyan Williams’ touchdown run.